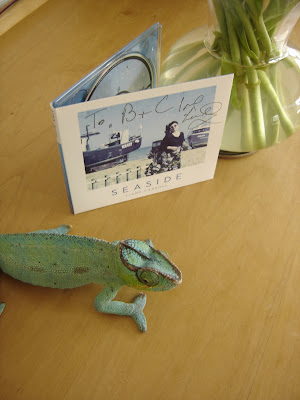 Annie's Jazz club, which is currently celebrating its 8th year of 'bringing London to you' (the 'you' in this case being the coastal fringes of Essex) has a nomadic history. During the early days, it was hosted by a variety of pubs, in and around Southend-on-Sea. In recent times it has settled into an unlikely new home at the golf club, in leafy, well-heeled Thorpe Bay, where it convenes every Tuesday evening. It is a popular night out, drawing a lively and appreciative crowd, with an average age sitting somewhere between 60 and 70.

A return visit from Liane Carroll, a singer and piano player, who combines vocal jazz with salacious anecdotes and asides, has sold out the small venue. In the main bar, where a row of tall, plate glass windows overlook a manicured fairway and some distant sand traps bordering an adjacent green, every available space between the tables seems to be occupied by a chair. Waiters, bearing steaming plates of food, manoeuvre sideways along narrow trails through the shifting labyrinth, squeezing past members of audience, who are advancing single file, in snaking columns, in the opposite direction, towards the bar.

Eventually the room settles down and the lights are dimmed. Visible over a sea of nodding grey heads, ensconced behind a small electric piano, in front of a shuttered trophy cabinet, Carroll is a perpetually smiling presence, her eyes closed and her head tilted back and bobbing in the general vicinity of the microphone. She has one of those effortless, malleable voices that sounds like it could go anywhere, and seems to be carried along on an outpouring of joy, as she roams freely back and forth between the lyrics of other people's songs and her own scat singing.

Her sense of mischievousness, which is not evident early on, gradually comes to the fore over the course of three sets, or “trimesters” as she calls them, aided and abetted by tall glasses of “cucumber water” procured from the bar.

She pauses in the introduction to one song to ask an elderly gentleman who is struggling to remove a red sweater whether he is okay. “I've got some spaceships,” she says, referring to what appears to be a bag of sherbet saucers on top of the piano, which she playfully threatens to flick at anyone in the audience who falls asleep. She recalls her recent purchase of a Nutribullet: “It's supposed to be healthy but so far I've only used mine to make pina coladas.”

With Carroll the poignant and the absurd go hand in hand, neither one encroaching upon the other. It's like watching a skilled high wire artist who delights in throwing herself comically off-balance.

Her plaintive rendition of Misty - a vulnerable and open-hearted declaration of love - incorporates a lengthy instrumental break, the piano settling into a holding pattern while she tells the following joke:

(I am paraphrasing here)

“My uncle was walking past a club in Essex when this blonde girl comes tumbling out through the front doors. She looks him up and down, then she says:

'Why have you got L and R painted on your boots?'

My uncle replies: 'It's to remind me which boot goes on which foot.'

'Oh,' says the girl. 'Is that why my knickers have got C&A written on them?'”

(For the benefit of American or millennial readers, C&A was a popular clothing store in the UK back in the 80s and 90s)

Mixed in among the standards are a smattering of relatively contemporary songs. A brisk run through Donald Fagen's Walk Between The Raindrops. Taking It With Me from the Tom Waits album Mule Variations. You Can Let Go Now (subtitled by Carroll as “the Imodium song”) originally by the soulful crooner and former Doobie Brother, Michael McDonald.

- A childhood piano teacher who threatened to cut an inch off her hair for every mistake that she made.

- A nomination for Best Vocalist in the (then) impending Jazz FM awards. She hasn't been invited to perform at the ceremony so doesn't fancy her chances, but is going anyway for the canapés.

- Her recent “adventures with dentures” that prompted her to cancel what would have been a live performance on the BBC, due to her concerns that her teeth might fly out of her mouth in front of an audience of millions.

Before the final set there is a raffle. All jazz clubs should have a raffle. It cuts through any chin-stroking pretension and brings an air of conviviality to the room.

Annie (founder of the club) is summoned to the piano to duet while protesting “I've got a Fisherman's Friend in my mouth.”

Cue more raised eyebrows from Liane, who launches into another anecdote that showcases her delight in sowing the seeds of chaos: During a lunch at The Roslin Hotel earlier in the day, Annie's dog was mistaken for Liane's and much admired by the staff.

“He's not mine, “ she told them, before adding untruthfully “but I looked after him while your mummy was in prison, didn't I.”

As the evening draws towards its end, and with Annie's birthday a few hours away, a cake is brought on stage and we all sing Happy Birthday.

Liane introduces Seaside, the title track of her recent album, then, at the last moment, decides to perform Bye Bye Blackbird instead, inviting the audience to repeat her scat singing back to her, which we pull off in a rather overly-mannered and straight-jacketed fashion. She ends on a flourish, improvising lyrics thanking Annie and the other guest musicians who have joined her on stage, the golf club and everyone in the room for coming to see her play.

The genuine applause that follows apparently merits an encore.

“Oh, do play Seaside, Liane,” begs one lady in the audience.

She acquiesces and the evening concludes on a touching note.


Liane Carroll will be playing three more times at Annie's Jazz Club in 2016, and, no doubt, at other venues across the country. This will include a performance at the Proms where she will be collaborating with the National Youth Jazz Orchestra of Scotland.
Posted by backwards7 at 12:07